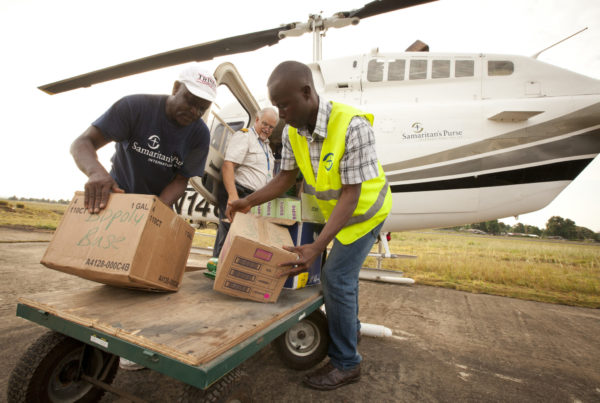 In the Christian world, Samaritan’s Purse is often looked at as a legendary type of organization. Our leader, Franklin Graham, makes the news quite often. Whether it’s Facing the Darkness of Ebola in West Africa or being asked to comment on how a political decision affects people of faith in the United States, he’s outspoken and unashamed.

I once heard a pastor whom I admire, talk about how people on his church staff were doing great things, but when they leave, they never do anything of significance ever again. He took that to mean that God was blessing his church, but not the individuals who decided to leave and work somewhere else. That always bothered me and I thought it was strange. I think that if you’re a good leader, you’ll want your people to succeed even if they leave and go somewhere else. Concerning this pastor, his entire world was probably his own church and denomination and probably didn’t consider anything else significant. It’s not that his people didn’t go on to do good things, it’s that he was too self involved to consider anything else significant.

At Samaritan’s Purse International Relief, we serve others in Jesus’ name and we do this around the world working with all believers from all walks of life.

Samaritan’s Purse is a nondenominational evangelical Christian organization providing spiritual and physical aid to hurting people around the world. Since 1970, Samaritan’s Purse has helped meet needs of people who are victims of war, poverty, natural disasters, disease, and famine with the purpose of sharing God’s love through His Son, Jesus Christ. The organization serves the church worldwide to promote the Gospel of the Lord Jesus Christ.

What about Operation Christmas Child?

Best of all, this is a volunteer to volunteer project. With volunteers in giving countries leading the charge of promotion and collection in their communities and volunteers in receiving countries leading the charge of distribution and evangelism in their communities. One side really can’t function well without the others. It really is the truest partnership I’ve ever seen between Christians in giving countries like the US, UK, Germany, Australia, Canada, Spain, Finland, and Japan, and Christians in over 100 countries who receive shoebox gifts and are responsible for their distribution.

We’re not perfect and we don’t claim to be, but we are pretty awesome! And we strive to get better every year.

At Operation Christmas Child, I’m the Volunteer Relations Manager for the US program. That means that I lead a team who sets policies, procedures, develops training, and takes on projects to further the development of our US volunteer program. I also spend a lot of time telling people to not say thank you to volunteers, seriously, I do!

We have an incredible team of staff and volunteers at Operation Christmas Child. I don’t believe there’s a better team out there. Our mission and our leadership can’t be beat. You may say I’m biased, but I really believe it!

1. Saying no is absolutely necessary

Want to know what I spend most of my time doing? Having meetings with people, reviewing resources for approval, and prioritizing projects. There are some incredible people who have great ideas. Honestly, I hear great ideas all of the time. Most of them are good ideas that have the ability to expand ministry.

However, we can’t do them all. Doing them all would be stretching ourselves so thin that we wouldn’t be able to get much done. That’s where prioritization comes in. We have to move forward on the ideas and projects that are in alignment with our leadership’s goals and that will give us the highest return on investment possible. ROI isn’t just a finance term. ROI is a useful way of thinking for investing not only your financial resources, but something more important than that, your human resources.

Think of it this way. Choosing to say no to many good things gives you the opportunity to say yes to a few great things.

Saying no can sometimes be the most important thing you do. Saying no to the good allows you to fully pursue the great. <- That’s tweet-able, right?

2. Leading people is a huge responsibility

Even though I’ve known and experienced this for some time, it’s a lesson that never fades away. Whenever you have influence into someone’s calling in life, whether as an employee or a volunteer, you should NEVER take that lightly. I believe that’s a responsibility that you’ll have to answer to God Himself for. When it comes to someone’s calling, their career, where they move to or from, and how you lead them, it’s not to be played with. If you don’t think it’s that big of a deal, then do everyone a favor and never put yourself in a position of leadership.

3. A leader needs to learn to be a good coach

Phil Jackson is the legendary NBA Basketball coach of the Chicago Bulls and LA Lakers. Not only did he lead both teams to Championship seasons, but he led the biggest stars and biggest egos of our generation.

I recognize how important it is to be a good coach and I’m working toward that skill. Being a good coach doesn’t mean you get in the game and make the basket, it means you setup your players to make the basket. It means you train your team, you develop a plan, you stick to the plan when others doubt, and you throw out the plan when you need to. You may lead stars who are infinitely better than you are or you may mentor players who are struggling to make it on the team.

Through all this, a good coach has the vision to take the team from sweat to victory.

4. Leading laterally is the most important skill most people lack

Leading laterally is a term that I just recently learned from Eric Geiger. He wrote an article on Leading Laterally and the tension between himself and Ed Stetzer when Eric went to work at Lifeway. I won’t get into the specifics of Eric’s article, you can read that on his site.

Leading laterally is a great skill to have at Operation Christmas Child. We often work with colleagues from other teams and other departments with whom we have no kind of positional authority. Still, we have a responsibility to lead and complete our projects. Honestly, this is something in which I excelled in and I’m not totally sure why. I found it easy to connect with people and lead projects across teams and departments. In my experience, people at Samaritan’s Purse are eager to support one another and set one another up for success.

I believe that in the last four years at Samaritan’s Purse, I’ve excelled in my leadership like never before. I’ve become a better leader, a better employee, and a better supervisor. My time here as been an incredible learning experience and I’m excited to see what the future holds.

If you don’t want to move or give up your current job but you still want to be a part of the team, pray about partnering with us as an Operation Christmas Child Connect Volunteer.